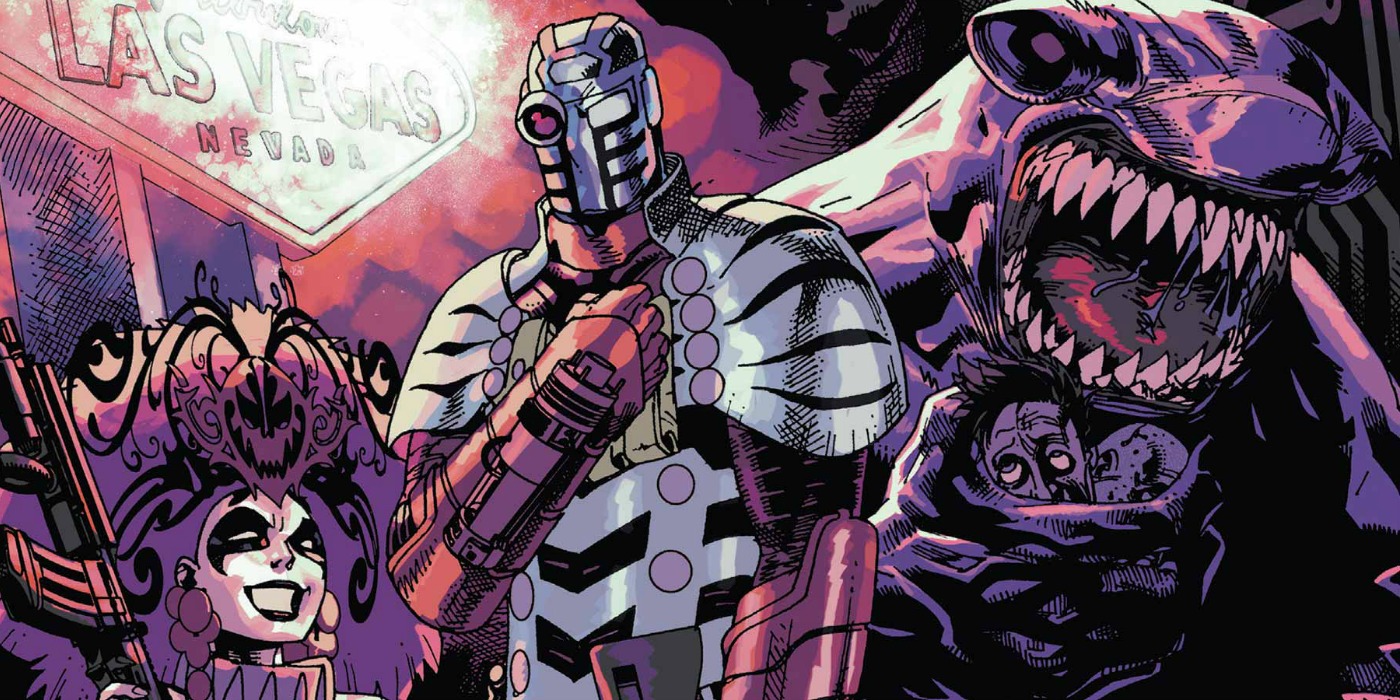 The Suicide Squad is an elite government strike force operating under Task Force X. They are expendable agents who go on life-threatening missions, usually covert in nature. There have been several incarnations of this team. The original was a group called the Suicide Squadron in WWII lead by Sargent Rick Flag Sr.. The second group were high-profile monster hunters lead by Rick Flag Jr. Amanda Waller reactivated the program during Legends as a team of imprisoned super-criminals. They serve in exchange for reduced sentences. These super-criminals are sent on top-secret missions, with explosive devices that can be detonated by Waller if they disobey orders. This allows the government to deny their existence, as any mission can be called a “random super-villain attack.” In addition to government work, they have sometimes operated independently.

Amanda Waller set out to create a task force of expendable super-powered agents for the United States government. She had her people kidnap 37 supercriminals on death row from Belle Reve prison, and then put them through severe training. They were also implanted with micro-bombs in order to insure their obedience. On what they thought was their first mission, the seven surviving members of the Suicide Squad were captured and tortured for information regarding their team and their employer. Of the seven, only Savant broke. After determining that the remaining six wouldn’t talk, Amanda Waller revealed that the torture was all just another test, and that those six remaining would officially form the Suicide Squad.

They are then deployed in a sports stadium and learn that their objective is to retrieve a package from a woman. They soon learn that all of the people in the stadium have been infected with a virus that turns them into mindless creatures who can only destroy and kill each other. The place was shut down by the national guard and the team members are joined by Voltaic. The team is then attacked by a group of the infected, but they manage to successfully fight them off. After a bit of fighting, they manage to find their way through to the target and they are surprised to discover that the target is pregnant. After fighting that target, who is just as mindless as the rest of the infected, they take the baby from the womb, because it is revealed that the baby is immune to the infection and thus, the only thing that “is worth saving”. Voltaic is then shot by Deadshot, killing him instantly and left in the stadium to blame for the events that have trespassed. Unfortunately for the team, there isn’t enough cover for extraction and so they have to escape and ‘lay low’ for some time. Deadshot reminds Waller of the bombs they have implanted within their heads, but Waller states that they still have 3 hours to live.

Then, the team tries to ‘lay low’ for a bit, but eventually come under fire of a bounty hunter named Mad Dog. Before they dealt with Mad Dog, they were trying to lay low and buy food and fit into regular clothes. Harley then tries to seduce Deadshot, but is interrupted by a call from Waller. Diablo also sees that in the news, Voltaic is already being blamed for the murder of all of the people in the stadium. When they finally meet Mad Dog, they deal with him, but not before Black Spider is injured. Diablo tries to save him, but is unable to carry him due to exhaustion. Harley offers to help, with the condition that none of them mention that she ever helped Black Spider.

When they get to the evacuation drop, Black Spider gets medical attention, they have their bombs reset and two new members are added to the crew: Captain Boomerang and Yo-Yo. Boomerang boasts that he is replacing Deadshot as the leader.

The team is sent to a secret organization called Basilisk to pick up Dr. Elisa Visyak. She poisons herself with cyanide, only for El Disblo to burn it out of her system. Yo-Yo shows his power to be that he can change his size and protects the team from a hail of gunfire. Deadshot and Boomerang then encounter a woman named Grey Lora. Deadshot says the name “Wong Fong Yay,” a woman who both are apparently connected to and Boomerang killed. Deadshot shoots him in the hand and leaves him there with Basilisk. When they get back to Belle Reve, Harley Quinn’s nanobomb is deactivated against Waller’s orders.

Deadshot, Yo-Yo and El Diablo are tasked with dealing with all of Belle Reve’s prisoners when their cells are all opened. Diablo is knocked out and Deadshot is thrown off of the guard tower when the virus causes his muscles to freeze up, while Black Spider (still in the infirmary) beats up several other inmates before collapsing on the floor. Yo-Yo makes himself extremely thin to retrieve King Shark so he can help, but Shark eats him. Diablo wakes up and scares all of the prisoners back into their cells by burning three. Waller allows Deadshot a visit with a girl named Suchin, cutting it short when she learns Harley Quinn was behind the prison break, and used it to escape.