The Klyntar, better known as the Symbiotes

better known as the Symbiotes, are a species of amorphous symbiotic extraterrestrials from the Andromeda Galaxy. In their natural state, the Klyntar were benevolent, and endeavoured to create an intergalactic peacekeeping society by using the symbiosis they need to subsist in order to transform worthy hosts into the ultimate noble warriors. However, to achieve this perfect symbiosis, the host must have a perfect blend of moral and physical ideals. If not, the resulting symbiosis would corrupt both the Klyntar and its host. Symbiotes are fully aware and sentient creatures, but when corrupted are also vicious and wild, compelling their hosts to violence and corrupting them.

At some point in the distant past, these corrupted Klyntar established a brutal spacefaring empire dedicated to infecting and overtaking entire planets, spreading misinformation about their benevolent counterparts. As a result, the species as a whole developed the reputation of being amorphous predatory monsters that dominate their host mentally and physically while parasitically feeding off their emotions and bodies. The corrupted Klyntar tend to force their hosts to perform spectacular and terrifying feats in order to feed off of the resulting rush of adrenaline (and possibly other hormones, such as phenethylamine).

Eventually, these host beings would be sucked dry, exhausted by the constant stress and exertion, or simply die in a failed stunt, whereupon the symbiote would seek out a new host and repeat the process. At some point in time, a colony of feral Klyntar encountered the Silver Surfer and the planet they had conquered was devoured by Galactus, causing them to develop an instinctual fear of the Surfer via their genetic memory. At another point in time, feral Klyntar invaded the Microverse, where their very existence proved corrosive and toxic, and attempted to consume the Enigma Force itself, but were repelled. 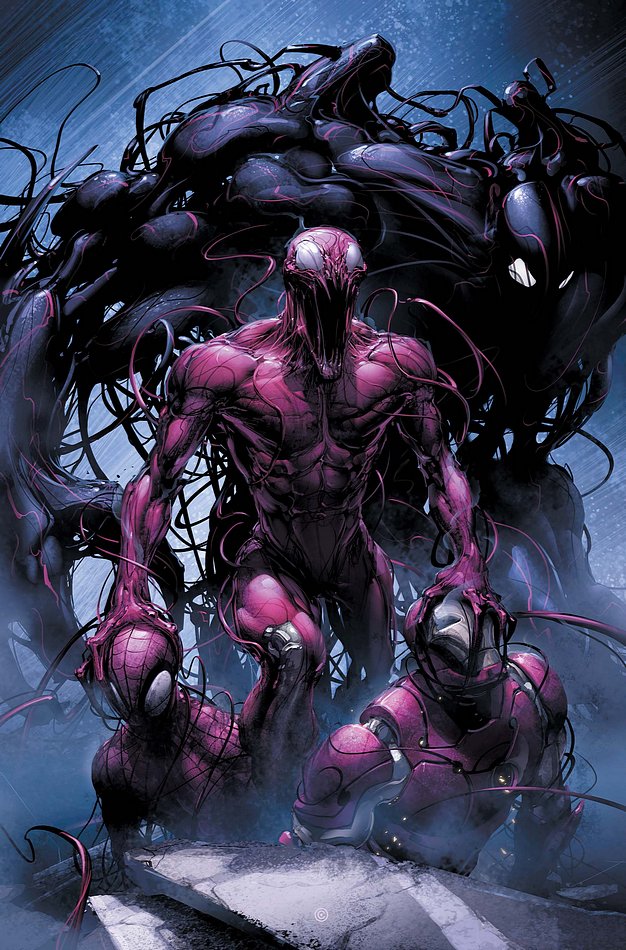 While corrupted Klyntar are cut off from their species’ hive-mind and unable to access their full potential, it has been noted on several occasions that certain long-lived specimens have become more powerful over time, usually by bonding to multiple successive hosts. and can develop increased resistance to heat and sonics with repeated exposure. In some cases, they can undergo spontaneous mutation and develop new abilities, such as the Venom symbiote developing the ability to form weaponry, and the Carnage symbiote developing the abilities to convert negative emotions into biomass and to remotely control pieces of itself separated from its main body. Successive generations of symbiotes will also be more powerful than their predecessors, and feral symbiotes are instinctually indifferent or hostile towards their progenitors and progenyMany feral Klyntar, such as Venom, Carnage, Toxin, and Zzxz, have developed predatory appetites for the flesh of other life-forms and will even influence or force their hosts to commit cannibalism. At least one feral Klyntar, the Carnage symbiote, has demonstrated the ability to convert consumed organic material into additional biomass, using this power to assist in conquering the town of Doverton, Colorado and to regenerate from a small tissue sample after being separated from its host. Feral Klyntar are much more effective at bonding to their host if the host has the same feelings and urges as the symbiote. For example, the Venom symbiote bonded successfully with Eddie Brock because they shared anger and desire for revenge towards Spider-Man. As this shows, symbiotes are able to project their own emotions and personal desires, in addition to reflecting and reacting to the emotions and desires of their host, to the point of assuming complete control over their host’s body if they so choose. A symbiote’s influence over its host can be resisted and suppressed through a number of means, including willpower and chemical sedatives. Symbiotes in general are weak to intense heat and sonics, although successive generations can develop a resistance to these weaknesses, and an individual symbiote can also mutate to become more resilient over time. Klyntar can also amalgamate with one another to become more powerful, as seen with the Hybrid symbiote, and with the Venom-Carnage hybrids created by Marquis Radu.

Even if separated from a host, trace remnants of the Klyntar’s biomass will often remain in the host’s body, as seen with the Venom symbiote leaving remnants of itself within the bodies of Peter Parker and Eddie Brock.The Carnage symbiote has taken this process to an extreme by merging with its host’s blood, making separating them very difficult.

The symbiote that would eventually become Venom was the 998th generation of a lineage of feral symbiotes. Due to its desire to form a single, strong, symbiotic bond with its host and protect them, like the peaceful Klyntar, it was identified as deranged by others of its race, who used their hosts as chattel. The symbiote was placed in a prison canister, and supposedly condemned to death by disintegration.

Symbiotes feed on their host’s adrenaline, usually released into the bloodstream during the fight-or-flight response. They have also been shown to depend on their hosts for a steady supply of phenethylamine, a chemical found as a neurotransmitter in the human brain. While this has been known to lead some symbiotes to consume the brains of others, the chemical can also be ready found in processed chocolate. While the symbiotes are connected to a host, they raise their host’s dopamine levels. They can apparently be killed, or at least forced into some sort of death-like state, by an overdose of dopamine-inhibitor. Symbiotes aren’t able to bond with hosts who have high levels of vitamin C in their blood streams. There are several levels of biological symbiosis, or “bonding” that can be achieved between a symbiote and its host, each with different biological consequences.

Symbiotes have some ability to sense the thoughts and emotions of sentient creatures, though to what extent remains unclear. The Venom symbiote was able to pattern itself after Spider-Man’s thought, and respond to his mental commands even without significant bonding. The psychic scream of the Venom symbiote was able to draw the attention of space-faring symbiotes, while powerful feelings of emotional anguish were able to actually kill many symbiotes.

Symbiotes have a genetic memory, allowing them to exploit their parents’ knowledge through ancestral recall. On Earth, this allows Venom’s descendants to benefit from the symbiote’s former bond with Spider-Man by gaining spider-like powers. Certain memories seem to be more readily accessible than others. For example, the trauma of Galactus devouring a world populated by symbiotes so scarred the surviving members of the species that it still invokes an intense reaction in all symbiotes today.

Symbiotes are genderless, reproduce asexually, and generally produce only one offspring in a lifetime. In the case of Venom, seeds were forcibly extracted to produce more offspring. There is no family structure, and in fact it seems to be common for parent and offspring to hate each other. However this observation is taken mostly from the relationship between Venom and his children. Venom hates Carnage because of his murderous nature (not to mention that when they were cell mates they had an antagonistic relationship). When his other “children” were born he thought that they would end up like Carnage so he placed his hatred of him on them. However, recently the Venom symbiote was pregnant after absorbing a clone of itself and wanted to rebounded with Spider-Man because bounding with Brock would kill the child because he had cancer. While they have a latent ability to sense the proximity of their progeny, they usually have no interest in them. The one exception comes once every 1,000 generations, when a symbiote is born with a high risk of psychotic breakdown, and must be guided by older symbiotes, or else destroyed.

Their unique properties make the symbiotes immune to most conventional weapons. They are dense enough to absorbed the force of powerful blows and stop bullets before they reach the host being. They are able to process breathable gases for the host when it would otherwise be unable (underwater, for example). They seem to confer a weak healing factor on strongly-bonded hosts, but that bond can also send host and symbiote alike into shock if they are forcibly separated.

All symbiotes other than Payback seem to have a weakness against very large vibrations and heat. Samuel Sterns mentioned that symbiotes also have a weakness to magnesium. However, this turned out to be false as it had no effect on Venom.