The Godzilla film series is broken into several (different) eras reflecting a characteristic style and corresponding to the same eras used to classify all kaiju eiga (monster movies) in Japan. The first two eras refer to the Japanese emperor during production: the Shōwa era, and the Heisei era. The third is called the Millennium era as the emperor (Heisei) is the same but these films are considered to have a different style and storyline than the Heisei era.

Over the series history, the films have reflected the social and political climate in Japan. In the original film, Godzilla was an allegory for the effects of the hydrogen bomb, and the consequences that such weapons might have on earth. The radioactive contamination of the Japanese fishing boat Daigo Fukuryū Maru through the United States’ Castle Bravo thermonuclear device test on Bikini Atoll, on March 1, 1954 led to much press coverage in Japan preceding the release of the first movie in 1954. The Heisei and Millennium series have largely continued this concept.

The initial series of movies is named for the Shōwa period in Japan (as all of these films were produced before Emperor Hirohito’s death in 1989). This Shōwa timeline spanned from 1954, with Godzilla, to 1975, with Terror of Mechagodzilla. With the exceptions of Godzilla, Godzilla Raids Again, Mothra vs. Godzilla and Terror of Mechagodzilla, much of the Shōwa series is relatively light-hearted. Starting with Ghidorah, the Three-Headed Monster, Godzilla began evolving into a friendlier, more playful antihero (this transition was complete by Son of Godzilla, where it is shown as a good character), and as years went by, it evolved into an anthropomorphic superhero. Ghidorah, the Three-Headed Monster was also significant for introducing Godzilla’s archenemy and the main antagonist of the series, King Ghidorah. The films Son of Godzilla and All Monsters Attack were aimed at youthful audiences, featuring the appearance of Godzilla’s son, Minilla. Godzilla vs. Mechagodzilla was notable for introducing Godzilla’s robotic arch foe and secondary villain of the movie series Mechagodzilla. The Shōwa period tied loosely in to a number of Toho- produced films in which Godzilla himself did not appear and consequently saw the addition of many monsters into the Godzilla continuity, three of which (Mothra, Rodan, and Varan) originated in their own solo movies and another three (Baragon, Manda, and Gorosaurus) appeared in their first films as antagonistic or secondary characters.

Haruo Nakajima mainly portrayed Godzilla since 1954 until his retirement in 1972. However, other stunt actors portrayed the character in his absence, such as Katsumi Tezuka, Yū Sekida, Ryosaku Takasugi, Seiji Onaka, Shinji Takagi, Isao Zushi, and Toru Kawai. Eiji Tsuburaya directed the special effects for the first six films of the series. His protege Sadamasa Arikawa took over the effects work for the next three films (with Tsuburaya supervising), while Teruyoshi Nakano directed the special effects for the last six films of the series.

The Heisei films are set in a single timeline, with each film providing continuity to another film, and brings Godzilla back as a destructive force of nature that is feared by humans. The biological nature and science behind Godzilla became a much more discussed issue in the films, showing the increased focus on the moral aspects of genetics. Godzilla vs. King Ghidorah gave the first concrete birth story for Godzilla, featuring a “Godzillasaurus” dinosaur-like creature that was mutated by radiation into Godzilla. Godzilla was portrayed by Kenpachiro Satsuma for the Heisei films while the special effects were directed by Koichi Kawakita, with the exception of The Return of Godzilla, for which the effects were directed by Teruyoshi Nakano.

Toho rebooted the franchise for a second time, with the 1999 film Godzilla 2000, starting the third era of Godzilla films, known as the Millennium series. The Millennium series is treated similarly to an anthology series where each film, with the exception of Godzilla Against Mechagodzilla and Godzilla: Tokyo S.O.S., is set in its own timeline and follows-up the events of the original 1954 Godzilla film, but ignores the events of the Shōwa and Heisei eras.

After the release of 2004’s Godzilla: Final Wars, marking the 50th anniversary of the Godzilla film franchise, Toho declared that it would not produce another Godzilla film for another ten years. Toho also demolished the water stage on its lot used in numerous Godzilla, kaiju and tokusatsu films. Yoshimitsu Banno, who had directed 1971’s Godzilla vs. Hedorah, secured the rights from Toho to make an IMAX 3D short film production, based on a story similar to his Hedorah film. This project eventually led to the development of Legendary’s 2014 film.

Godzilla had his own comic book series in the 1970’s.

When he fought the Avengers, he flicked Thor away like a mere insect, exhibiting an amazing degree of invulnerability. 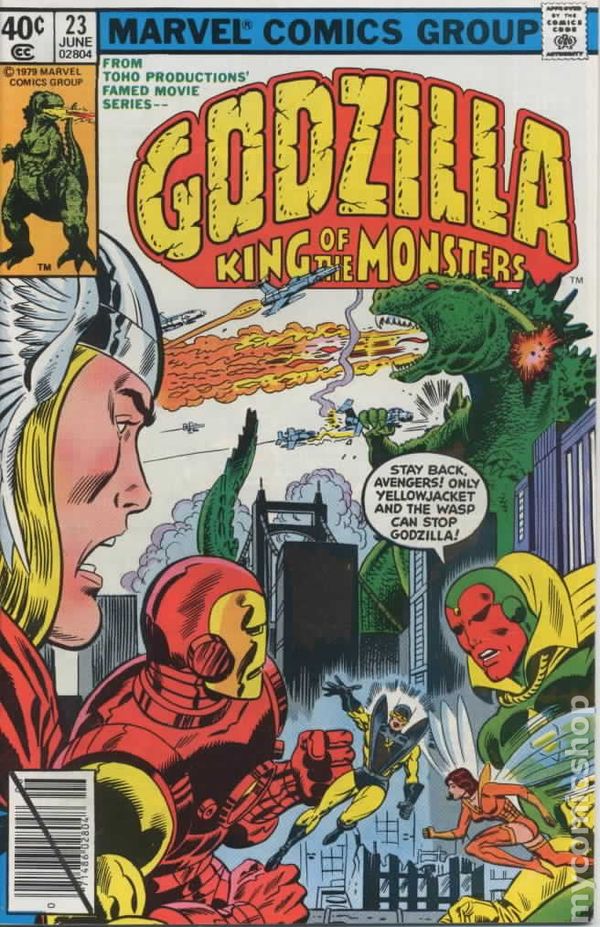 Within the context of the Japanese films, Godzilla’s exact origins vary, but it is generally depicted as an enormous, violent, prehistoric sea monster awakened and empowered by nuclear radiation. Although the specific details of Godzilla’s appearance have varied slightly over the years, the overall impression has remained consistent. Inspired by the fictional Rhedosaurus created by animator Ray Harryhausen for the film The Beast from 20,000 Fathoms, Godzilla’s iconic character design was conceived as that of an amphibious reptilian monster based around the loose concept of a dinosaur with an erect standing posture, scaly skin, an anthropomorphic torso with muscular arms, spikes on its back and tail, and a furrowed brow. Art director Akira Watanabe combined attributes of a Tyrannosaurus, an Iguanodon, a Stegosaurus and an alligator to form a sort of blended chimera, inspired by illustrations from an issue of Life magazine. To emphasise the monster’s relationship with the atomic bomb, its skin texture was inspired by the keloid scars seen on survivors in Hiroshima. The basic design has a reptilian visage, a robust build, an upright posture, a long tail and rows of serrated fins along the back. In the original film, the fins were added for purely aesthetic purposes, in order to further differentiate Godzilla from any other living or extinct creature. Godzilla is sometimes depicted as green in comics, cartoons and movie posters, but the costumes used in the movies were usually painted charcoal grey with bone-white dorsal fins up until the film.

Godzilla’s signature weapon is its “atomic breath,” a nuclear blast that it generates inside of its body and unleashes from its jaws in the form of a blue or red radioactive heat ray. Toho’s special effects department has used various techniques to render the breath, from physical gas-powered flames to hand-drawn or computer-generated fire. Godzilla is shown to possess immense physical strength and muscularity. Haruo Nakajima, the actor who played Godzilla in the original films, was a black belt in Judo and used his expertise to choreograph the battle sequences. Godzilla can breathe underwater, and is described in the original film by the character Dr. Yamane as a transitional form between a marine and a terrestrial reptile. Godzilla is shown to have great vitality: it is immune to conventional weaponry thanks to its rugged hide and ability to regenerate, and as a result of surviving a nuclear explosion, it cannot be destroyed by anything less powerful. Various films, television shows, comics and games have depicted Godzilla with additional powers such as an atomic pulse, magnetism, precognition, fireballs, an electric bite, superhuman speed, eye beams and even flight.

Godzilla’s allegiance and motivations have changed from film to film to suit the needs of the story. Although Godzilla does not like humans, it will fight alongside humanity against common threats. However, it makes no special effort to protect human life or property and will turn against its human allies on a whim. It is not motivated to attack by predatory instinct: it doesn’t eat people, and instead sustains itself on radiation and an omnivorous diet. When inquired if Godzilla was “good or bad”, producer Shogo Tomiyama likened it to a Shinto “God of Destruction” which lacks moral agency and cannot be held to human standards of good and evil. “He totally destroys everything and then there is a rebirth. Something new and fresh can begin.”