Angry, impetuous, quiet, pragmatic, but above all else… an older brother. At the age of eighteen Robbie Reyes is the sole caretaker of his disabled little brother, Gabe. Balancing school, homework, a part-time job at Canelo’s Auto & Body, overall care of his little brother, and a infamous low-key street racing gig, Robbie’s day to day schedule is always hectic and unforgiving. It should come to no surprise when a street race competition promises to lighten the stress of Robbie’s responsibilities in the form of fifty thousand dollars to move Gabe to better a neighborhood that Robbie would jump on the challenge.

As skilled a driver as Robbie Reyes is, he could not have foreseen the intervention of Dr. Zabo’s hired paramilitary cartel. Hitting a dead end, Robbie gave himself up. With his hands on his head and knees to the ground, Robbie Reyes was mercilessly shot dead nine times before he hit the cement. The group confiscated seven duffle bags from the trunk of the “borrowed” Nineteen sixty-nine Dodge Charger carrying valued cargo in the form of Pink pills; a defective DNA manipulating capsule designed to dramatically increase the users strength, size, stamina, appetite, and aggression, created by Dr. Zabo.

Unbeknownst to anyone, the car is in fact haunted. Brought back to life by the Spirit of Eli Morrow, Robbie’s face catches fire, his flesh melts and Robbie Reyes is suddenly transformed into the Hellfire blazing, chain wielding, car riding, leather wearing, supernatural being… the ALL-NEW GHOST RIDER!

Robbie Reyes was co-created by Felipe Smith and Tradd Moore. He made his first appearance in All-New Ghost Rider #1, May 26, 2014. According to quotes by Tradd Moore, Robbie’s Ghost Rider appearance was intended to evoke a “sleek, techno vibe while also being grim and intimidating” the idea apparently sparked some interesting rhetorical questions as Moore was quoted “In my head I was thinking like, ‘What if Death joined Daft Punk? What if Satan became a Power Ranger? What if Speed Racer went to hell and came back a slasher villain? What would that look like?”

A talented young mechanic with a penchant for anything with an engine and electronic music, but above all else he loves his little brother Gabe. All Robbie Reyes wants in life is to protect his disabled little brother. Gabe is bullied by Robbie’s classmates, Guero and his friends. When Robbie stands up for his little brother, he is held at gunpoint and beaten up for their trouble. Guero and friends even take Robbie’s shoes and Gabe’s wheelchair.

It comes as no surprise later that night Robbie Reyes would enter an illegal street race worth fifty thousand dollars in hopes of winning so he and Gabe could move to a new neighborhood. The 1969 Dodge Charger he borrows from his place of employment, Canelo’s Auto & Body, however, has stolen contraband in its trunk; Pink pills created by the new cartel leader, Dr. Zabo. His paramilitary cartel hunt down an unassuming Robbie Reyes and shoot him dead nine times before he hits the cement in a hail of automatic gunfire and set the car on fire while collecting Zabo’s defective Pink pills.

That car however… is haunted by a spirit named Eli Morrow. Morrow brings Robbie back to life, embedding himself in Robbie’s psyche, giving Robbie the power to transform into the Hellfire blazing, chain wielding, car riding, leather wearing, supernatural being… the All-New Ghost Rider! Together they avenge his untimely death, and Robbie wakes up in his bedroom none the wiser; as if all was a nightmare. But when a local gang leader by the name of Grumpy who’s managed to steal a large quantity of Zabo’s defective pills tries to reclaim his Dodge, members of his gang attempt to shoot Robbie down again for trying to take the car out for a second joy-ride. Only this time is different, the All-New Ghost Rider emerges, gets rid of the thugs and Robbie demands answers from the Spirit.

Dr. Zabo and his growing Urban Alliance look all over Los Angeles to find the last of his defective Pink pills. Once they make a deal with a young man, Guero and his friends, to join their ranks and earn good money in exchange for information on the whereabouts of his pills… the results are catastrophic. An all-out war breaks out over Robbie’s neighborhood between Grumpy’s local gang and Zabo’s cartel. After getting his little brother, Gabe to safety, a hesitant Robbie uses his new powers to fight off Zabo’s men and save the neighborhood.

Later that night, still disguised as the supernatural racer, Robbie beats up Guero and his crew and takes back Gabe’s wheelchair.

As it turns out, Morrow was not such a good guy when he was alive. It’s discovered he was a former hit-man for the Russian Mob, not only that, but he was a serial killing Satanist! He’s escaped eternal damnation through Satanic rituals to once again walk among the living and resume his killing spree. Robbie Reyes is his host of choice, and Robbie’s been struggling to win back his body and mind ever since while trying to balance the responsibilities of his unforgiving day to day schedule. 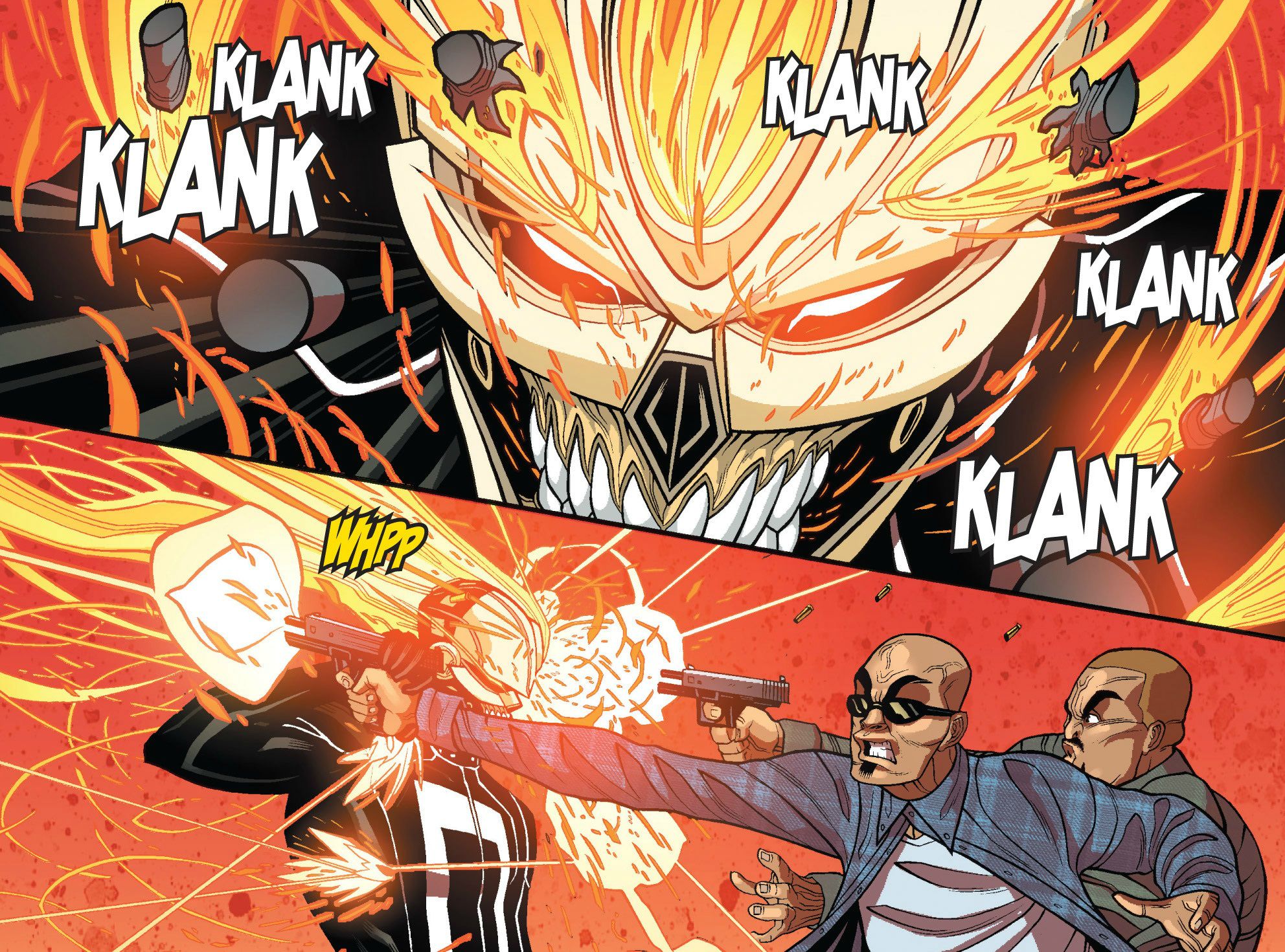 Meanwhile, since their last defeat, Dr. Zabo has regrouped. Armed with a new and improved Blue pill possessing all the strengths of the Pink pills with none of the aggressive side-effects, Zabo is ready to make his move over the Eastern territory gangs of Los Angeles. He assembles his Blue Hyde Brigade; a force of unified crime made up of young, impressionable teens gangsters, hulked out on his new Blue pill, but loyal and obedient to a fault; a group whom Guero and his friends eagerly become members of. With his new army, Zabo gains the full cooperation of every syndicate in L.A. aside from the Russian Mob, a fact he is not pleased with. Dr. Zabo concocts a plan, a deal, they take care of the All-New Ghost Rider and the Russian Mob joins his Urban Alliance. Frightened with his last ordeal with the All-New Ghost Rider, Russian Mob Boss Yegor Ivanov accepts, but has no idea Zabo has no intention of saving Ivanov’s life.

Unbeknownst to Robbie, original Ghost Rider Johnny Blaze has ridden into town. Unsure if Robbie is friend or foe, the two clash. Later Johnny Blaze instructs Robbie how to take control of his Ghost Rider abilities, and Robbie manages to keep Morrow’s spirit at bay, but not without a terrible cost. Robbie and Johnny fight back Zabo’s Blue Hyde Brigade and Robbie is declared a part of the Ghost Rider family but… his little brother Gabe may never trust him again.