At the age of sixteen, Slade Wilson was determined to enlist in the U.S Army, so he ran away from home and lied about his age to be in the army. He soon showed talents and skills in guerrilla warfare far superior to that of any other soldier in the army and was quickly promoted over and over by his superiors.

After a while his outstanding reputation landed him under the wing of Adeline Kane, an instructor who became one of his superiors and whom he befriended. Slade trained under his commanding officer, Captain Adeline Kane, and quickly amazed her, demonstrating he was an expert in combat and had impressive talents and skills.

Slade mastered several combat styles and was promoted to Lieutenant Colonel. Some time later, Slade Wilson began a romantic relationship with Adeline and had a son with her.

Soon after the birth of his first son, Grant Wilson; The Army asked Slade to be a volunteer of a secret medical experiment that was said to be a defense against the enemy’s Truth Serum and he agreed. (It was later revealed to be really an attempt to create a test to make metahuman super-soldiers).

Slade’s body reacted violently to the experiment, it made him aggressive and enraged, and he needed to remain sedated and bedridden through the birth of his second son Joseph Wilson. Only later would Slade discover that the experiment had worked and actually enhanced his strength, speed, senses, stamina, intellect and reflexes beyond that of any ordinary man. With his duties in the army limited to that of desk work, Slade dedicated himself to professional hunting in order to fill the void he felt within himself as a fighter and he married Adeline Kane.

However this life too was put on hold, when William Randolph Wintergreen, a lifelong friend, was sent on a suicide mission and was captured. When his superiors refused to help, Slade was forced to do the impossible; he put together a costume and went on an unauthorized solo mission to save his friend. In the end he saved Wintergreen, but was discharged from the army for disobeying orders. Slade decided this was for the best. Fed up with the army and its code of blind loyalty, Slade created the costumed persona of Deathstroke the Terminator, the greatest mercenary the world would ever know by using the knowledge he had acquired from his military training and under the tutelage of master martial artist Natas.

Slade continued to take up contracts under the guise of Deathstroke, becoming famous on an international level, all without telling any of his family members about it. However that all changed the day he was hired to kill a high ranking colonel in the Qurac military. His youngest son Joseph was kidnapped by a terrorist known as ”The Jackal”. The ransom: the names of those who hired him to kill the colonel. Determined to keep his code of honor, Deathstroke gambled his son’s life against the power of his meta-human abilities. He killed all the kidnappers and his son was saved, but just barely, his throat had been slit and with that his vocal cords were cut and Joseph Wilson would remain a mute for most of his life.
Slade took Joseph to the hospital, and at the time he was also forced to finally reveal his secret identity to his wife, this along with his seemingly careless actions towards their son enraged Adeline and drove her to try and kill Slade by shooting him in the face. Slade managed to dodge the fatal gunshot, but not enough to save his right eye; however that didn’t make a great impact on his physical abilities. Slade and his wife divorced soon after, and Adeline decided against telling her first son, Grant, about Slade’s secret identity, a decision that would later backfire.

A few years later Slade was offered a contract by The H.I.V.E. to kill a group of super powered teenagers known as the Teen Titans. Slade refused but Grant Wilson, who ironically idolized Deathstroke (never knowing this was his father), became The Ravager, and assumed the contract himself. As payment, The H.I.V.E. offered him powers beyond those of Deathstroke’s abilities. When Ravager attacked the Titans Deathstroke intervened, but in the end joined his son instead. Together they seemed to be on their way to winning, when Grant’s powers suddenly overloaded. His cells began to decay rapidly and Slade Wilson could only watch as the Ravager, his first born son, died in his arms.

Upon Grant’s death, Slade bitterly swore to fulfill his son’s contract and kill the Teen Titans in his stead. Soon however, Deathstroke found the task too much to fulfill on his own, and so employed Tara Markov, a young girl with dangerous earth-bending powers. She worked alongside Slade as a spy amongst the Teen Titans, learning all their secrets and weaknesses. Finally, Deathstroke made his move and one by one he delivered the Titans to the H.I.V.E. At the same time Adeline, who had been keeping tabs on Slade, along with Joseph approached Dick Grayson aka Robin and offered to help rescue his friends if he merely accepted Joseph into the team, This would mark the first appearance of Joseph Wilson as Jericho. Nightwing ( The new persona of Dick Grayson) and Jericho successfully freed the Titans and Slade was apprehended and put on trial for kidnapping. However Gar Logan, still mourning over the death of Tara (who tragically died at the hands of her own emotionally unstable powers) sabotaged the trail and went after Slade intent on killing him. Slade confronted Gar unmasked and unarmed, and the two men parted on a truce. Slade finally free of the burden of Grant’s death, retired from life as a mercenary, and took up hunting again in Africa. 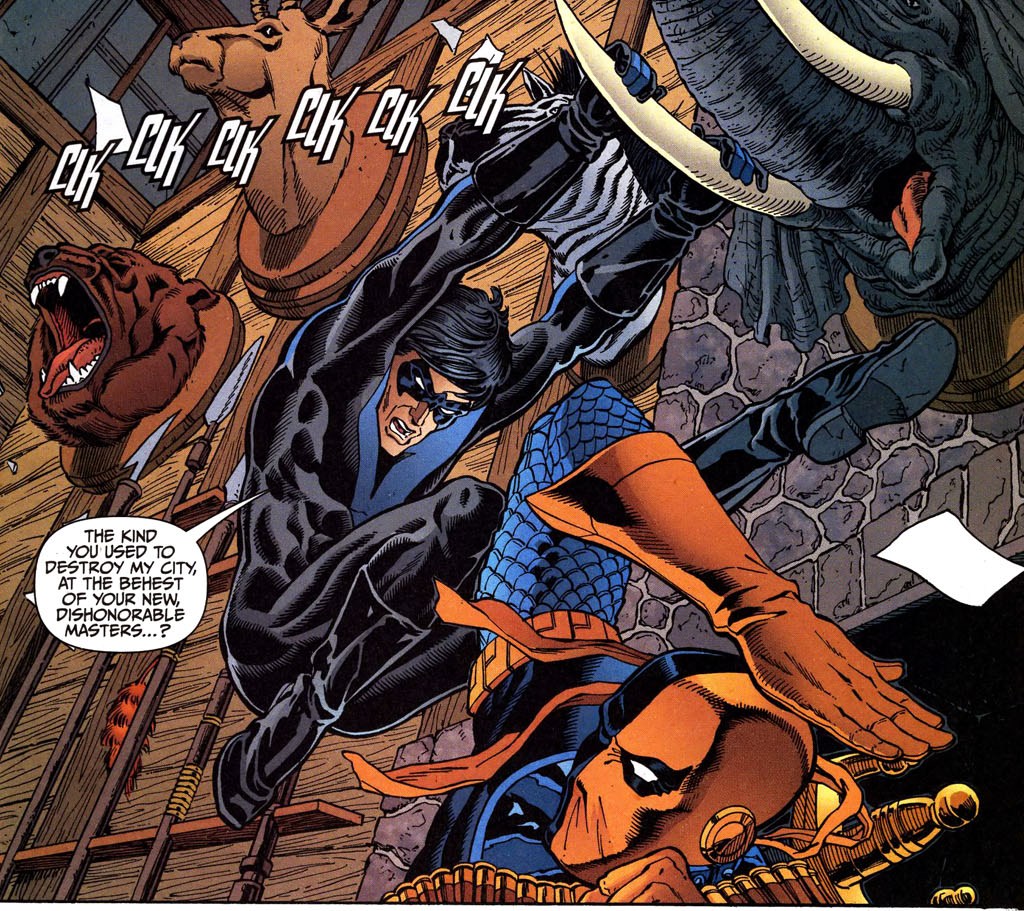 Slade would later return to being Deathstroke, however this time with a stricter code of honor, that allowed him to became an ally of the Titans. When the Titans were captured by the Wildebeest Society, Deathstroke helped the New Titans track down their missing teammates. Much to everyone’s surprise, the leader of the Wildebeest Society was a corrupted Jericho. While transferring the souls of Azarath to the bodies of the Titans, the real Jericho resurfaced and begged his father to save him. Without any other choice, Deathstroke killed his son by driving a sword through his body, causing himself a great deal of grief, as he felt that it was his fault that both of his sons were now dead.

During the battle with Wade, Adeline Kane is shot and presumed dead, until she miraculously reawakens. Following the events of Deathstroke’s World Tour story arc, Slade gives Adeline a blood transfusion to save her life, which apparently also included his regenerative abilities. However Adeline would later resurface as the new H.I.V.E. mistress, driven mad by the same blood that made her immortal.

Deathstroke teams up with the Titans in an attempt to save Adeline and stop Vandal Savage, the leader of Tartarus, who attempts to harvest Adeline’s blood to gain immortality. Bleeding out slowly and drained of her superpowers, Adeline reaches out to Slade and begs him to reunite her with their sons. Deathstroke refuses, but Starfire makes the decision herself, and ends Adeline Kane’s life. Starfire’s drastic act causes Deathstroke to break all ties with the Titans.