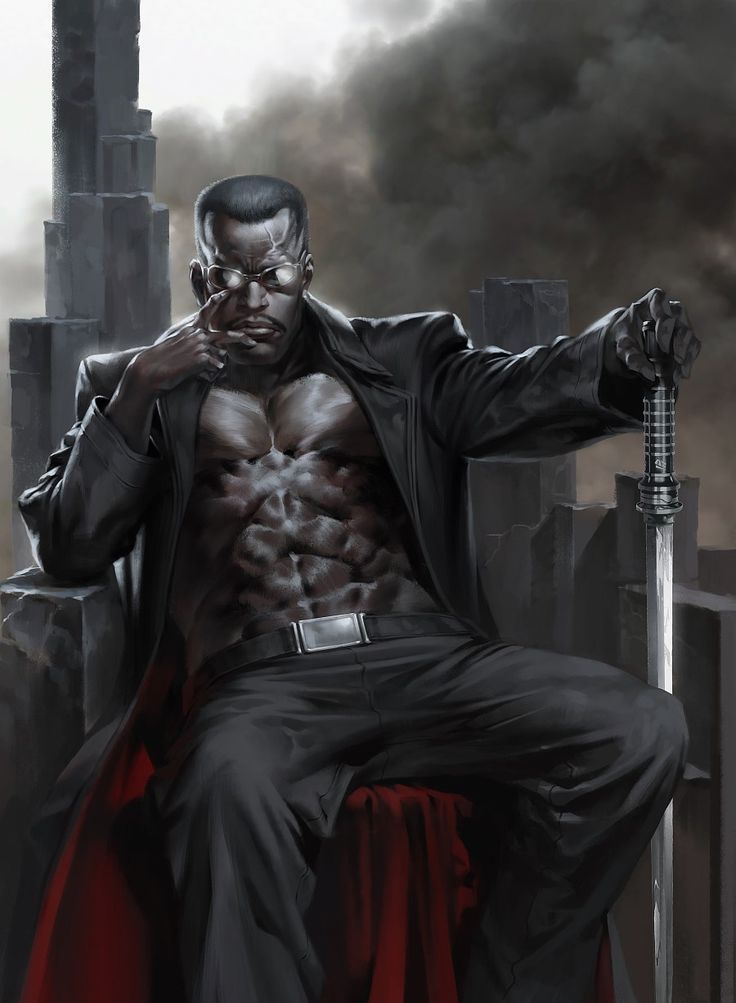 Eric Brooks, the man later known as Blade, was born in Soho, London, in 1929. His father, Lucas Cross, a member of the secret society the Order of Tyrana, sent his pregnant wife Tara to England before he was taken prisoner in Latveria. There she took the name Vanessa Brooks and found shelter with brothel owner Madame Vanity, another member of the Order of Tyrana. Experiencing labor complications, Tara was forced to seek a doctor’s assistance. The doctor, Deacon Frost, was actually a ravenous vampire and feasted on the woman as she gave birth, passing on a series of enzymes that altered her baby. The enzymes entered the infant’s bloodstream, transforming him into a being tainted by a vampire’s kiss, but not converted. In other words half-man, half-vampire. Frost was driven away before he could slay the child, but Tara perished, leaving the orphaned Eric Brooks to be raised at Madame Vanity’s brothel.

While he was growing up on the street of London, he ran into American veteran Vampire Slayer, Jamal Afari and saved him from being killed by vampires with a grudge against the old man.

Afari soon learned about Eric and his origins’ and decided to take him under his wing, becoming his mentor and foster-father and helped him to control his powers. Afari taught Eric everything he knew about hunting, fighting and killing vampires.

Determined to avenge his mother’s death, Eric fashioned himself into a vampire hunter like Afari while still a teenager and started calling himself Blade, after the sharp weapons with which he used to kill vampires with. Finally, Blade and Afari split up when Jamal willingly took the fall for murder when Blade accidentally killed a man (who was suffering from a deranged illness), which he mistook for being a vampire.

After stalking the night on his own for a number of years, Blade became a part of a small band of like-minded individuals hunting Dracula consisting of Musenda, Orjin, Ogun and Azu. Blade went to Dracula and told him he represented a group of men who believed that in another sixty years vampires would rule the world and that realizing humanity had no chance against their “superiors” Blade would offer his and his associates assistance to carry on Dracula’s bidding during the daytime. Blade further enticed Dracula with this idea telling him that they had facilitated a plan that would speed up global conquest by vampires to only ten years. Intrigued, Dracula agreed to go with Blade to meet his associates. Dracula met these associates: Ogun, Azu, Musenda and Orji. However, Dracula would soon find that this was all a trap and that they were really a group of vampire killers. They would nearly succeed in destroying Dracula by driving a stake into his heart. It was during this battle, Blade’s companion would tie out wooden knives of his own design and find that they work just as well as stakes. However, Dracula soon was resurrected by his servants and exacted revenge by murdering the band of vampire hunters, leaving only Musenda and Blade alive.

On November 7, 1972, the murder of a bat-like monster in New York brought Blade’s attention. When looking for the corpse in a morgue, he discovered Kaluu intervening the body with magic, and attacked him believing him to be a vampire and an enemy. As soon as detective James Lucas, Constaince Molina and Adam Brashear arrived at the scene, the fight was stopped when Blade realized he was among allies. They started investigating the murder as soon as The Bear appeared, and presented herself as the killer of that creature, in self-defense, as she wanted to prevent the Deathwalkers from using it for a sacrifice.

Blade pressed on, often fighting alongside a team led by Quincy Harker, the great vampire hunter. The company’s members included Rachel Van Hellsing and Frank Drake. Blade and the team battle Dracula and attempt to kill him and rescue Elizabeth Langley. Blade and the hunters chase Dracula across Europe. After being attacked by his mindless slaves they reach the mortuary, The team managed to outnumber him, and eventually Blade got close enough to the vampire lord to steak him through the heart, effectively killing Dracula.However his death was short-lived and he was resurrected by his minions. Blade attempts to once more slay Dracula. Dracula managed to overpower Blade, and feed upon the vampire hunter, before leaving him for dead. Quincy Harker comes across the body of Blade seeing that Blade has been bitten by Dracula, and assuming his ally to be dead, Quincy Harker got a stake out and prepared to ram it through Blade’s heart. Before Quincy can strike, Blade suddenly revives and to Quincy’s surprise, Blade has not changed into a vampire. Blade explained that through some twist of fate he is immune to vampire bites due to the fact his mother was bit by a vampire while Blade was being born. Blade vows to use his immunity to his advantage and not let it stop him from destroying all vampires.They travel to London and at Quincy’s home he tried to convince Blade to stay and continue their quest to destroy Dracula. Blade declined the offer, feeling that he should get back on the case of the vampire responsible for killing his mother. Blade returned to the flat that he shared with Saffron to find that a vampire has broken in and was attempting to feed upon Saffron. Blade easily destroyed her attacker. A friend Trudy explained what happened and Blade agreed to help and agreed to go out looking for Dracula. Put on his vampire hunting gear, Blade went out into the night and was soon attacked by Dracula in his bat form. Dracula knocks him down into the street with a car speeding toward him. Blade battled Dracula across the city, their fight took them to a sporting goods store. Dracula was forced to retreat when Blade managed to partially impale the vampire lord in the chest with a broken ski pole, and then later with one of his wooden daggers. With the battle over, Scotland Yard lets Blade walk away from the scene, and he returns home to Saffron and Trudy rest and told them he would explain everything in the morning.

When Dracula travelled to Boston, Blade was also their tracking down the vampire who killed his mother. Blade attacked the Vampire but was easily stopped in his tracks by Dracula who demanded that Blade accompany him back to Harold’s home to meet with Quincy Harker. Dracula explained he has nothing to do with the murders and that the coven is acting on their own. Blade had no interest in getting involved with their battle with Dr. Sun as he came to destroy the vampire who killed his mother. When Dr. Sun was about to kill Dracula Blade arrived and offered assistance in killing Dr. Sun. The two work together and destroy Dr. Sun. But after the fight Blade threatened Dracula telling him that if he does not help him find his mothers killer he would die by his hands. Dracula refused to be ordered around, leading to a battle between the two.

The agency discontinued after Drake left and Blade was committed to a psychiatric hospital following a battle with a temporarily resurrected Dracula. Doctor Strange later arranged the release of Blade so that he could join Drake and King in reforming Borderline Inc. as the Nightstalkers. The mother of all demons, Lilith, hired Blade’s agency to kill Ghost Rider — the leather-clad, motorcycle-riding Spirit of Vengeance — and bad-boy Johnny Blaze, the fiery skeleton’s former host. After a protracted battle, Blade and company realized they had been duped. The team joined with Ghost Rider and Blaze against Lilith, battling her monstrous minion Meatmarket. Blade, Drake and King continued their partnership with Ghost Rider and Blaze. Along with Dr. Strange, Morbious the Living Vampire and the Darkhold Redeemers, they formed the Midnight , a group dedicated to preserving the boundaries between our world and the dark realms. The Midnight Sons clashed with Lilith and her demonspawn, the Lilin, in a supernatural contest with Earth as the prize. The Midnight Sons proved victorious, destroying Lilith and her brood. Blade also rescued his close friend Safron Caulder from the Darkholders.

In New Orleans, Blade teamed with Brother Voodoo to stop Marie Laveau and Deacon Frost’s plans to build an undead army. Later, Blade and Spider-Man encountered the vampire Henry Sage and learned of the development of the Daywalker formula, a version of the Sunlight Serum. Blade helped Spider-Man try to capture their former ally Morbius, who was under the control of a vampire known as the Hunger. During the battle, Morbius bit Blade, but his blood enzymes were not enough to protect him from Morbius unique form of vampirism. Transforming him into a Daywalker, a vampire able to move about in the sunlight and lacking most of the vampire’s traditional weaknesses. Blade was now driven by bloodthirst, however, but he is able to hold it back with a serum.

Still in New Orleans he is contacted by Dominique Levant. She led the hunter in to the midst of a vampiric coup which involved Morbious the living Vampire and the powerful Ulysses. Sojourner sought to unify all vampires on the East Coast, but Blade was able to stop his plans.